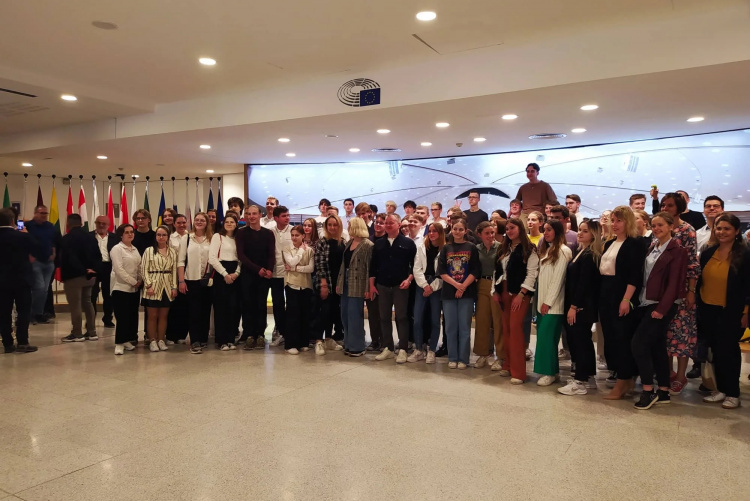 Until 2020, the European Parliament often held meetings with students, listened to their ideas and discussed various topics. An example is the Erasmus program, which allows students to travel to study on an exchange basis. But due to Covid-19 these meetings were suspended. And so, after two years of waiting, we, the G1 and G2 students, were able to go to Brussels and discuss some important topics.

The seminar started when we came to the building of the European Parliament. The building was large and very beautiful in terms of architecture. Inside the building’s main hall the organizers divided us into groups. After all the participants gathered, the conference began. Each country introduced itself and we were ready to work. At the beginning, we were briefly told about the plan and the topics we would be discussing. The seminar continued with a break during which we managed to walk around the building. After that we started to work in our groups. We had 3 groups and 3 topics to discuss, but all of them had one thing in common – they were about social media. The goal was to discuss in groups such issues as: media freedom, disinformation, media literacy, then present the solutions we came up with to the other groups. Thanks to this meeting we learnt a lot, such as how to avoid lying on the Internet and how to help journalists.

Here are our observations about the seminar.

Raimond Vladimirov: I can say that the seminar was a useful experience for me. I participated in the “Media Literacy” group. We discussed mainly the topic of disinformation in social media and its regulation. Although I disagreed with the majority due to my slightly more free-minded views on social media regulation by the government, it was interesting to hear about other opinions. Also, I enjoyed the presentation about the job of our moderators from the EP Spokesperson Unit. Our moderator, Francois, gave us some insights into how they deal with fakes on the web. Generally, I gained a few more skills and this experience strengthened my belief in European cooperation.

Sofia Anissimova: Our group had an interesting discussion on the topic of disinformation these days. The work was brilliant, everyone had a chance to express their point of view and we also mentioned our own countries. This topic is important because a lot depends on it. People read newspapers and think that everything written there is true, but there may be wrong information and people will not know the truth. Incorrect information will be spread and this can lead to problems. After the discussion, I learned more about journalism and the reasons why we have few newspaper publishers. I enjoyed taking part in the discussion and if I have the opportunity in the future, I would love to take part again.

Karl Liiv: The topic of my group was “Social media and misinformation”. I think the work of the group and the way everyone got on with each other went well. One of the topics we discussed was algorithms and filter bubbles. How they decide what we see on social media, and that social media apps should offer a feature to enable or disable the filter bubble. I think this is important because people should be aware of what’s going on around them and they should not be restricted in what they can see and only show things that they like. I am happy that I had the opportunity to visit another country and learn about this topic.

The event ended with a meeting with MEP Marina Kaljurand (S&D). In her speech she touched on the topic of misinformation and commented on the solutions that the teams had developed.  During the event we also met a lot of new people not only from other Estonian cities, but also from France and the Czech Republic. Seminars organized by the EU such as this visit to the European Parliament are an excellent opportunity to communicate with the best professionals, gain new skills, meet new people and see new places. Finally, we can say that all of us really enjoyed the opportunity and would like to participate more in the EU events.

As well as taking part in the main event, we also enjoyed being in Brussels for a few days. Relaxing atmosphere of the Belgian capital is filled with delicious food, beautiful streets, a spectacular Grand-Place and friendly people. Of course we did some shopping as everyone could find something for themselves in Brussels. The locals are friendly to foreigners, so we found new friends among them during our stay. We stayed in the Molenbeek neighborhood which is one of the most multicultural places in the city. Seeing people from different cultural backgrounds living together in peace is a great example of European cooperation.